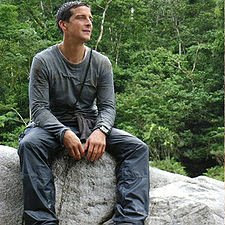 Personal life
Born and raised in Bembridge on the Isle of Wight.[5] He is the son of the late Conservative party politician Sir Michael Grylls and Sally Grylls, the former Sarah Ford.[6] His maternal grandmother was Patricia Ford,[7] an Ulster Unionist Party MP. He has one sibling, an elder sister, Lara.

Grylls was educated at Ludgrove School, Eton College, and Birkbeck, University of London,[8] where he graduated with a degree, obtained part-time, in Hispanic studies in 2002. He is also a second dan black belt in Shotokan karate. He can speak English, Spanish, and French.[9] Grylls has a strong Christian faith, and described his faith in an interview with Channel 4 as being the 'backbone' in his life.[9]

Grylls has been married since 2000, and he and his wife Shara Grylls (née Cannings Knight)[3][7] have two sons, Jesse and Marmaduke.[10]

Man Vs Wild was so damn nice. But Mission Everest was nicer. XD

Today is wednesday. tml have to go to school and sell stuffs for koperasi. Dun feel

like goin thr, but since every koperasi member is goin thr. I had no choice ! lol.

Last friday i watched Quantom of Solace. Its not as good as Casino Royale. They dont

use high tech gadgets. wtf. And they use Aston Martin but not Ferrari. hahaha. cut

Yanyi
Posted by Dë~3MusketEErz at 09:04 No comments: