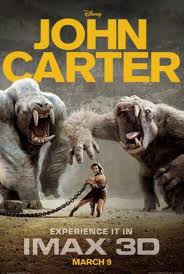 Yeah, watched it yesterday. We thought we could have it in 4D, since our Sunway Carnival Mall was flooded yesterday after the big rain. We believed the rainwater penetrated from the ceiling in Maxis. Then, amazing things happened!!Flooding in third storey of a building!!WOW!

ABOLIDEBOH!!We saw some westerners looked at ti with mouth gawked. Probably thinking : " Does it happen all the time here?" And I will answer : " This is actually part of an event here." XD

Everyone was busy sweeping out the water from their premises. And then it formed a water fall.

We were thinking whether the cinema was in the same condition.

Okay, John Carter. I walked in to watch it without knowing any information about it. To me, overall it was still okay, not that bad. A little bit better than Ghost Rider.

It is a fantasy story, it might be pointless, but if it gives you unexpected plots, introducing different ideas, I think it can be considered as a nice film.

The setting of the story is New York of 19th century. During that time people were keen to explore new things and seek gold. John Carter found a mandalion and he is transplanted to Mars. He begins his adventure there, fighting for the tenants of the Mars.

This kind of stories normally follow a paradigm. For example Indiana Jonnes, Pirates of Carribean, Narnia and so on. The only different thing is how you make it not too tedious for the audience.

I think the author of this story probably gaze at the night sky every night. Maybe he watched the sky with the author of Star Wars. That's why they have such good imagination.

Just put aside the scientific questions like how they breathe in Mars, how can they sustain their lives at such a high temperature. Just enjoy the feast of eyes. Indulge yourself in the wild imagination. You will have a feeling like there are still many things we do not know about the universe, maybe the fairy tales are true and you start to create your own story when the plot of the film expands.

Next time lift up your head to gaze at the night sky for a while. Quiet down your heart. Your imagination will be triggered.

That's the reason why I like to gaze at the stars - where you can reach your dreams.