Wake Me Up When Holidays End!

Well, this is probably the last post for me during holidays. I have suddenly been informed that KRS trip to old folk's home,Chi Ji and Youth Park will be held on tomorrow. Sunday I need to pack things and ready to school dy.=)
Later 10am Khai Cheat will come to my place to fetch me to Bola-bola to play football.
View back my holidays, since I have a lot of time now without activities ( which I have mentioned lots of times.haha), meaning I have a lot of time to waste too. I spent 4 days morning and night at church to join Bible Courses. I learned a lot from the courses, 'Sovereignty of God' give answers to many questions asked like Why there are so many disasters like tzunamis and earth quakes happening all around the world if God is sovereign?Why this world is so evil since God of Love and mercy created this world Himself?
After watching the latest Pirates film, I decided to watch the 3 previous Pirates again. I actually included them in my holidays plan although I have no plans for holidays.hahaha.Lame right?
I watched the first one on last Sunday night, it is really nice and funny. Last night I continued the second 'the dead man chest' , this one is more eerie and dark compared to the first one and the fourth one. You will start to hate Jack Sparrow for his wickedness and he is so irresponsible. Tell you, you wouldn't see him as a hero but a coward. I wondered, although he is good at fighting skill,but his leadership is damn poor, how can such person be the captain of the ship?In spite of his poor leadership, his crews are willing to submit to his authority and remain faithful. Are they bound by loyalty or they simply respect him from hearts? Perharps this is the amazing part of Jack Sparrow. That is the reason why he was mutinied and always appear in the screen as a captain who has no ship. Little does he know the safest ship in the world is leadership?
Ya, I am going to watch Pirates of Caribbean 3:at world's end by tonight.XD I think I like the first and the fouth because Jack Sparrow acts more like a good man and hero.
Here I wish Neri all the best in her exams. Since she will be back soon, I have to polish my cutting skills so I can perform the best in helping Ah Jing in cutting vegetables at her party.Hahaha. In fact, I don't know how to hold a knive properly -._____.-
This photo was taken in 2007 in Adventist hospital. That time my mother was admitted for a surgery. I wondered why my cousin posed like a deer ( or a buffalo?), maybe that time was near Christmas.haha.

That time there was no 'mountain' on my head yet haha, and my head is so round!
It is always nice when you look back into your past.=) 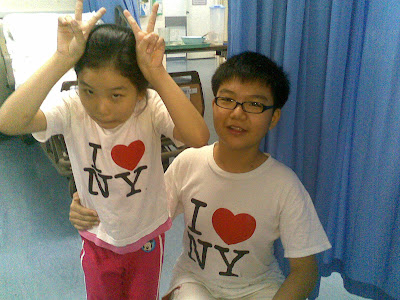 LIKE!
Ohya, please remember to wake me up when holidays end ya.XD