This is the most memorable day for this CNY. We went to Sunway Carnival first for a new year movie ' All Wells End Well'. GSC was crowded, luckily we got 15 tickets booked online.

After finish laughing in the cinema, we wanted to go for karaoke. We reached there later than the time we booked, so they wanted to charge us RM35 per person which is RM13 extra. So we pissed off and go back to my place earlier.

They brought those utensils down to the BBQ area, and started to defrost frozen food we bought earlier. Boys were working hard on fire.

At last got 25 attended, they preferred walking around the pool side and splashing water than eat. So we have many food left after that. Some of them stepped in the shallow part of pool, girls were happy playing with slides =.=, two were fell into the pool and got wet. His new Sony Ino gone.

At 10.00pm we were cleaning the site and wanted to start our games. However, a dark stain was on the ground after we remove the stove away. Between clean and RM200 fine, we chose to clean. We tried hard to remove the stain but it didn't work. At last we gave up. The time was 11.00pm when we finally cleared up. Many were gone back and left 6 of us.

We started our game!!what can we play with 6 persons and at such a late time?Perharps hide-and-seek will do.XD

I hide in a toilet corner for the 1st round. Nobody found me although they saw me ran into toilet.XD They nearly call the police.hahaha~

The second round, I hide at the same site, and was the first one to be found =(.

Hence I became the catcher for the third. I found Jingxue lying flat on the slide, Hui Wen keep running and 3 hiding inside a hole.

We were able to play 3 rounds only because the jaga wanted to close the area d. Although we just played for 30 minutes,but the game was nice. Searching ppl at late night and at a deserted eerie area.XD 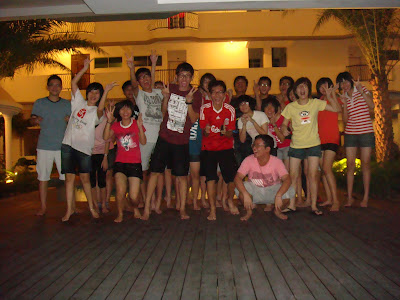 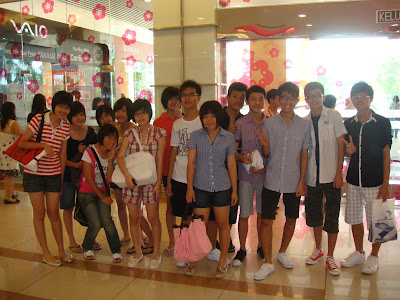