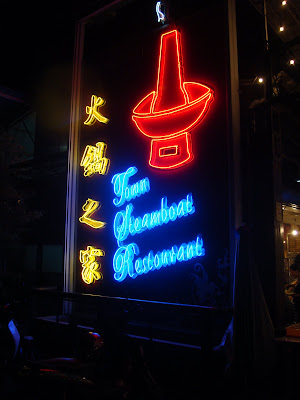 Yesterday we crossed over the sea to Penang just to have a steamboat dinner...
Why choose yesterday?it was all because the two little woman,one shorter one taller,one fatter one thinner.Su Mei & Hui Wen. They asked us to follow them and accompanied them. Don't you think they are so good, they just felt that it would be safer with guys.hahaha~just joking.

We agreed to meet at Jetty at 3.30pm. When Jingxue, Yi Chian and me reached the upper level of the jetty, we found no one. So we started to grumble : girls are not punctuate, girls are so late bla bla bla bla~ Den Hui Wen called Yi Chian, Yi Chian told her we had reached. She answered ok. We continued to wait,but saw no one. About 15 mins later, we became so restless, a ferry had reached the port, the passengers all descended from the ferry. We began to curse them (actually juz grumbling,haha). 5 mins later, Hui Wen called again, saying they reached there long time ago dy and asked where we were. We were so shocked, we thought they already aboarded the ferry, we ran towards the gate but it was closed. When we turned back,we saw them both.One tall and one short figure, were extremely recongisable.
Before we said hi, they started to scold us. "why you all so late one?? We have been waiting downstairs for 30 mins"
-_______________________________-
The truth was,we were grumbling them upstairs, they were scolding us downstairs. 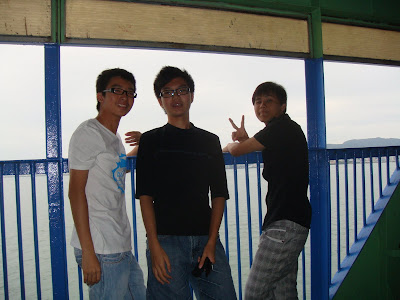 We reached there by a small stroll after taking bus to Komtar. It was early and we were absolutely the first customers of the day.XD
During the 3 hours dinner, many funny things could be happened when 2 crazy girls and 3 mad guys. Jingxue and I were trying to fry eggs there. We succeeded!Mine was prettier than his.=) 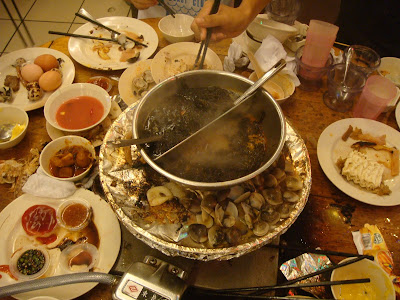 I wonder why Hui Wen likes so much La La.zzz.

ohya~the songs they played there were really cool~all were emo songs like 'my heart will go on'. Su Mei juz couldn't control herself and started to dance with the rhythm.

We ate non stoply. Our goals were to finish every food there to make our RM 18.90 worth enough.hahahaha~
5 of us were really enjoyed yesterday~for more photos please visit my facebook profile.Thank You. 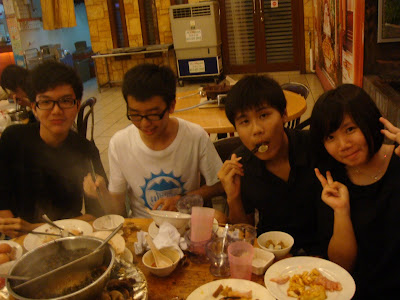