TRANSFOMERS 3 - DARK OF THE MOON

Although we missed it last Saturday, I watched it this afternoon right after school with Zhen Jie, Sheng Qi, Yi De, Wei Hong and our pattern king Bali.

I changed my full uniform at 9th period. Sheng Qi fetched me and Bali at 2.10pm to Sunway where the movie began at 2.45pm. While waiting for Zhen Jie them to reach I managed to grab a waffle for lunch.XD 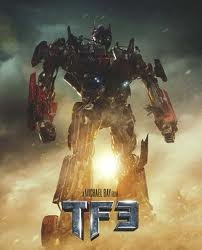 Okay~You all know the plot of Transfomers 3, so I skip it and straight to my viewpoints. Admittedly, I am not a pro movie critics like Zhen Jie. The impression TF3 gave me was "Wow". I can say its not boring. But if you ask me about the plots, the only thing I can say its quite creative, linking moon exploration with it. Although some critics say its very cheesy, overall its okay like others movie for me.

One thing is the metalic robots, or the so called Alien Intelligences, are so human. They are just like human wearing metallic coating. The way they speak, they act and they behaviour. They even bleed!hahaha.

Transfomers 3 also talks about betrayal. Sentinel Prime, which is the former Autobots leader, betrayed them because he wants to restore Cybertron by using earth resources. I think Optimus would not have foresee Sentinel's betrayal when he save him from the moon. He thinks Sentinel will show them how to end the war. He must be very sad and hurtful when Sentinel turned against him and killed his Autobots. In spite of feeling discouraged, he fights for human and fights for freedom. He did not give the traitor a second chance and he ended Sentinel's live. Optimus has totally lost his faith in Sentinel, that's why he kills him for the sake.

All in all, TF3 is quite an enjoyable movie, the fights between Autobots and Decepticons are magnificent.=) My mum say she may bring us for TF3 3-D.Yeah. I will watch TF3 for several times more, just to admire how the robots tansform from vehicles to robots. It's just so amazing, so mesmerizing! I really admire those designers, they are able to make every part of a car into a robot with all the elements like tyres, car mirrors, engines, exhaust pipes, doors and so on precisely shown. That's the reason the Transfomers kidnapped all the guys' hearts.

"In any war, there are calms between storms.
There will be days when we lose faith.
Days when our allies turn against us...
but the day will never come that we forsake
this planet and its people. "
Optimus Prime.
Posted by Dë~3MusketEErz at 21:19 No comments: