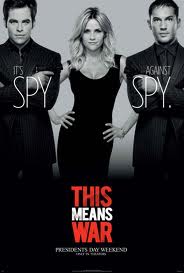 We were on the way to library to study. However, we headed to Sunway Carnival for "This Means War" instead last Thursday afternoon.

This film is great. It is a 18PL comedy haha. I don't know why it is rated as 18PL in Malaysia, maybe it is because the conversations are very rude and "deep".XD

What will happen when friendship meets love?

Try to imagine the awkward moment when two best friends who are willing to die for each other, fall in love for one lady at the same time. But the case is non of them is going to step back, they decide to strive their best to get the lady, putting aside their friendship, which means war.

The ways they chase the lady are probably the most high-tec and bizarre, using the equipments and skills they have as agents in CIA, they sneak in the lady's house to fix cameras to stalk her. They both have separate teams to help them.

Although the two guys are almost perfect, but one thing they mention in their so called "gentlemen agreement" is no having sex with her and let her choose who she wants to be with at last.

Ya, the key is her choice.

Luckily, their friendship rekindles and they become good partners again.

If I happened to face a situation like this, I think I will step back at once. To me, best friends are always on top of girlfriend, until she becomes my wife. Haha.