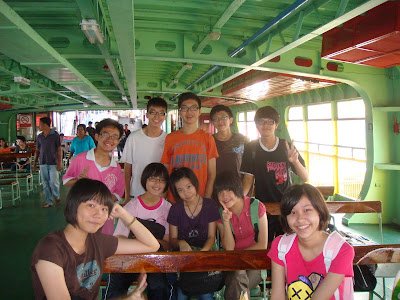 *For more photos and illustrations please visit my facebook album, lazy to post it here again,we have so many.Your cooperation is highly appreciated.*XD

Yesterday we went to Pantai Kerachut for fun. At first Jingxue wanted to ask all form 4s KRS members to go,but sadly most of them went to Genting Highlands. So we asked others form 4 non KRS go. The thing we figured out was : the whole Chung Ling students have gone to Genting except us pity little guys was left behind. We asked form 3s instead, thanks goodness some of them are still here.XD

About 8am we gathered at Jetty. Ferry was the first transport we took in our journey. On the ferry, I gave them a briefing. Haiz~they didn't record it, what a waste, I thought of it for whole night dy.

Er...here is roughly my speech : " Dear form3 members,you have the opportunity to join us in this trip, so lucky of u. I warned you ahead, this journey will be very exciting and extremely dangerous too. This activity required high self-disciplined ( they started to do funny expression), what I meant here is not addressing us as sir madame or following school rules, it's the spirit and the ability to do what is right plus safe and control yourself,capable to cope with tradegies and accidents:the determination to complete the tough journey.Here you are with us, I request absolute abide to our instructions and orders given, no objection,included to run and flee, to hide yourself, to keep yourself safe. Anything happened, we elders will sure protect you infront (WOW), that time please flee. Do not attempt to save us, run for your lives (Jingxue & Chun Yung please don't laugh.),go out of the bloody hell forest and search for external help. Help us to phoned our parents and tell them how much we love them (STOP laughing lah jingxue,serious business k.)... ..."

We took Rapid 101 to Teluk Bahang, the northest place you can reach by vehicle in the Penang Island. The journey took us 1hour and we were so noisy all the way. We had taken most of the bus' best seats and put our stuff on the seats so others couldn't take it.haha~

After filling up our bags with provision and refreshment, we enter the National Park and officially started our adventure.2 hours walking man!! The path is so narrow and the steps are so highly apart from each other.We need to lift our legs high to reach another step. Imagine, half climbing half walking like that for 2 hours!

I think we were lucky cause no any assault from creatures nor man. The atmosphere in the forest was so eerie and damp. It isn't the scenery you watched in Harry Potter 7. Chung Yung and Sie Chung said they heard tiger roar. They were the guys walking at the back, but I didn't hear any funny sound.

We reached a small junction. Jingxue, our leader suggested us to turn in the right path to go to see waterfall and river. We all agreed and made a U-turn down another path. However, Jingxue said it were not be so far, we may getting lost. He and Chun Yung continued to explore further while we waited on the spot. Later, he phoned me to lead the team back to the junction because the waterfall was too far away and required extra energy.

We encountered a signboard which stated : Pantai Kerachut 900m.

15 mins had passed and we haven't spot any sand scenery...

Finally we reached the beach!!The sea breeze had lifted up our spirit to high point. The coast was so beautiful!The beach was clean and pristine. We set up our tent to put our belongings inside. The first thing we did were to boil water at the kitchen there. We spread our food on the table and started swallowing up to our stomach content.

Jingxue and me scurried off to our mission impossible: fishing.

I brought 2 fishing rod along with me. We went to the jetty but even Jingxue, the pro in KRS can't fix the hook on the rod. We tried stupidly in front of the fishing pros...

You know what??The fish were so intelligent now,I think some of them got 8As in PMR or 10A+ in SPM.Some of them maybe graduated from Harvard University. Everytime we pulled up our hook, no fish attached to it but the bait had gone...

The girls were playing ball on the beach~they were so high and enjoyed themselves.At 2pm, Jingxue and I went back to our campsite to BBQ. A disastrous news struck us. Our bread and cup mee were stolen not by monkeys, but by the people close to our site. Seok Hui saw them holding it. Haiz~they want it??GIVE THEM BA!However the most sarcastic was that they brought woks and plates to cook on the spot, like holding a banquet there. Maybe they had everything except bread.

Jingxue and I continued to work hard on our mission. Our high spirit on fulfilling our task were so admirable and honoured. Jingxue said perharps there are no fish, so we moved to the rocks further away. The rocks were big and formed in many shapes. It was quite dangerous to climb on it.Again, with our borned fighting spirit we conquered them.XD haha~

As I was jumping from one rock to another and getting near to the shore, I thought the water was shallow,so I plunged my right leg in.Mama MIA!!It was a trap.My entire right leg was in the hole,my body formed at awkward position between the rocks. I stepped something hard on my foot. It's sea water ah!!!!

But I continued to fish despite my wounds were bleeding.XD haha...

I feared of any parasites or bacteria invade my body... this is the bad effect for studying too much biology.

Chun Yung summoned us back because we needed to get in the boat before low tide. As we were walking back along the beach,we saw three little fish, Jingxue suggested to take it as our capture. So I picked it up and show them. They don't believe yea cause the little fish were really too tiny. They all in one course condemned me for doing so, they said this lame and stupid action sure was my idea... T.T Jingxue was the one who asked me to do so laa...no one believe me...

We were on the journey back by the boat finally. During the ride, I kept shoot and peli by the handsome boat driver. You can heard it from the video, he kept scolding me for pointing the wrong direction.haha~the boat ride was full of jokes and fun.

Ah,we should spend one night day~in the pristine and quiet area, far away from mankind destruction. We were able to relax and listen to our innermost at such place. It's a holiday nice spot, why should we go overseas?(Pn Ng Yen Yen requested me to add this line.)