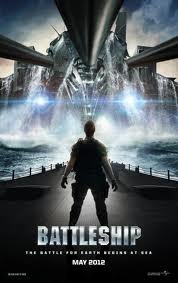 At first I thought this movie would be like one of those meaningless catasthrophic movies like Skyline or The Darkest Hour. That's why I refuse to buy a ticket to walk in the cinema, until last friday Jeffrey and I went to GSC One Utama to watch it in order to fill up our afternoon time.

This movie is superb! They have a nice starting telling the audience how and why the aliens will come to the earth - NASA sent a message to the outer space first from Hawaii. Unlike The Darkest Hour, the invisible aliens just popped up out of the blue.

5 alien spaceships reached the earth but 1 communication ship is broken into pieces when they enter the atmosphere. So the other four stationed at Pacific Ocean and one is sent to the Hawaii Islands to 'borrow' the communication system.

How the navy fights against the aliens is also well reasoned, not too fantasy nor too fake.

Many lessons can we youngsters learn from it too. Even though the aliens are seemed invincible, the captains from different nations are still willing to think a way to defeat them and to protect their countries.

One thing I like about the main character is the way he thinks. When his destroyer is shattered by the aliens, he thinks of using an old battleship, which is used as a museum at Hawaii. His crew members think he is insane to use such lousy battleship to fight against the aliens with advance weapons. Through their cooperation and strategy from The Art of War, they wipe all the aliens off the surface of the earth.

Ya, it is not how advance your weapons that matters, it is how your strategy works.

It is not how much knowledge you possess that matters, it is how you use them and the way you think.
Posted by Dë~3MusketEErz at 15:26 No comments: